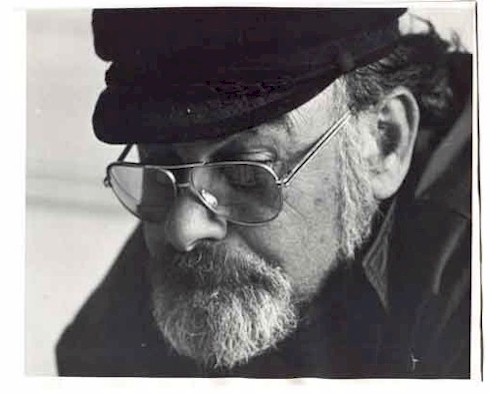 Zeke passed away Sunday, March 21, 2004 at 6:45 AM at Alameda Hospital after an unexpected brief illness.

Scroll down the page for historical and current photos of Zeke, even a baby photo!!

The Memorial Gathering and Potluck will be Saturday, April 3 at 2PM to 6PM at the Aeolian Yacht Club in Alameda, with “Zeke stories” starting at 3PM. The Club’s address is 980 Fernside Bl. Click here for directions to the Club.

Please email poems, stories, photographs, etc. you want to share to ann@appraisaltoday.com . They will be added to the photos and Zeke stories here. Or fax them to 800-839-0014. Or send them to our house at 1530 Eastshore Dr., Alameda, CA 94501. “Zeke stories” from his friends

Any contributions can be made in Zeke’s name to the American Cancer Society. www.cancer.org (donations link at the top of the page) or call 800-227-2345. He was a cancer survivor and was very active in the Alameda Relay for Life annual Walkathon.

The links below have not been added yet to this new web site as of 3/16. If you want the photos, contact us – see info at bottom of the page.

Zeke was a very special “people person.” There is a big empty spot now in many places. Two days before he passed away he called an old friend from his horticulture teaching days to say he would be at his 50th wedding anniversary. If he met a person once, he knew the person’s name. He remained friends with his three high school buddies and called them once a month. He had friends of all ages, from teenagers to those in their 90s, and kept in touch with many of them over the years.

He is survived by his wife of 28 years, Ann O’Rourke, son Bruce Mailman (Maya Kara) and his grandchildren Lila and Brian in Saipan, son Brian Mailman in San Francisco, sister Vibs (Dan) Grayson in Cleveland, brothers-in-law Gene (Patti) Tardiff, John (Terri) Tardiff, and Joel Tardiff, sister-in-law Julie (Stuart) Reichardt, cousins, nieces, nephews, his good friend and nurse, Catherine “Cat” Fitzgerald, and his many, many friends. He was predeceased by his daughter, Heidi Rozanne, who died in 1961 at the age of 4 years, his sister Jean Kaplan, and his parents, Harry and Elsie Mailman. Family stories and photos

Zeke grew up in Cleveland, OH. As a young man, Zeke had a hockey scholarship at Ohio State University, was a practice goalie for the Cleveland Bruins, and raced bicycles in a velodrome.

From 1944 to 1952 he was a chemist for Gulf Oil in Bakersfield, CA, rising to the rank of assistant chief chemist.

He was an expert horticulturist, starting as a child helping his mother in her garden. In the 1950s he managed garden departments in retail stores in Southern California and owned and operated The Greenhouse, a nursery, flower shop, pet store and landscaping business in Bakersfield, CA. He taught horticulture at Soledad State Prison from 1961 to 1975 and obtained a life teaching credential. In the 1960s and 1970s he taught horticulture classes at Monterey Peninsula College and Hartnell College. In 1980 he taught horticulture at California State University, Chico. Zeke wrote weekly gardening columns for over 25 years for the Monterey Peninsula Herald, Salinas, CA, and the Watsonville Pajaronian. He enjoyed growing plants (plant propagation) the most and joined the prestigious International Plant Propagators soon after it was founded in the 1951. Zeke was also a member of Garden Writers Association, California Indoor Plant Association, and many other horticulture associations. Horticulture stories and photos

Zeke inherited his love of cooking from his mother. He was a member of the Aeolian and Encinal Yacht Clubs in Alameda and was well known for his great brunches and dinners. His largest event was a dinner for the Oceanic Society serving over 350 people.

From the late 1970s through the 1990s Zeke was a commercial fisherman in Monterey and Half Moon Bay specializing in rock fish. His first boat was a 24 foot powerboat. He purchased his 32 foot commercial fishing boat, the Jerry Ann, in 1984, and was a member of the Half Moon Bay Fishermen’s Association and the Pacific Coast Federation of Fishermen’s Associations. Fishing stories and photos

From 1986 until his stroke in 2001, he worked with his wife in her two businesses. He did administrative work in her appraisal business, was the editor of Appraisal Today newsletter, and did all the postal mailings for her publishing business.

In the mid-1990s he started Custom Mailing Service, doing business mailings. He operated the business until a year ago.

Zeke was the “Iron Man.” He never gave up. Zeke had diabetes since he was 8 years old and learned to walk again after an accident that left him paralyzed when he was 18 years old. He survived prostate cancer in his early 50s, several heart attacks, and a stroke three years ago. He died at Alameda Hospital from an unexpected intestinal illness.

Zeke lived in Alameda since 1980 and was very active in the Alameda Kiwanis Club and the Greater Alameda Business Association. He attended his weekly Kiwanis lunch meeting four days before he passed away.

In the mid-1980s Zeke started using his childhood nickname, Zeke, instead of Jerry. He legally changed his name to Zeke J. Mailman in 2003. We always knew when telemarketers called as they asked for Jerry. We handed the phone to him and he told them his life story, starting with “my name is Zeke, not Jerry.” After 15-20 minutes he would say “I’m not interested in what you are selling.”

The Memorial Gathering will be Saturday, April 3 at 2 PM to 6 PM at the Aeolian Yacht Club in Alameda, with “Zeke stories” starting at 3 PM. The Club’s address is 980 Fernside Blvd.

The serious student – not!

The teacher, “Podocarpus is a good indoor plant.”

The Chef cooking for a big crowd

The Jerry Ann – time for a bottom painting.

Zeke, Skipper, and Catherine (“Cat”), his caregiver. Getting ready to rock and roll!!

Zeke and Cat at the Giants game.

Zeke and Ann in the family room, “hanging out.”