Narnia hid behind a wardrobe. Doctor Who’s Tardis was disguised as a blue police call box. With no signage and no flags, these out of the ordinary things are hidden away disguised as something utterly banal. In some cases, these things are camouflaged on accident; in others, they are secreted away so that only those in the know can find them.

Either way, the world is full of seemingly mundane places that are more than meets the eye. It reminds us to stay curious-one has to always be on the lookout for wonder. Here are nine places in the Atlas that may seem boring at first glance but are actually amazing once you take a closer look.

Here are a few:

3. Mystery Soda Machine – insert 75 cents and see what you get

The only parking meter in Winters, CA

My comment: Just For Fun!! We all work in the field and discover strange things. This article will make me look closer at what I see ;>

The following is an actual 2015 disciplinary action against an appraiser in which the appraiser lost his license and was required to reimburse the state for its investigation and prosecution costs in the amount of $125,828. In addition, if the applicant should care to reapply for a new license, he shall be required to pay an additional $115,828.

After reading the facts of the case, the testimony of the state investigators and the conclusions made by the court, I have very mixed emotions. On one hand appraiser Smith definitely made some errors which caused his appraisals to be misleading and inaccurate. These were very complex residential appraisals. In one instance, Smith testified that his fee for the appraisal was $4,700.

The question is not whether Smith was negligent. What impresses me most is the extent to which the state investigators went out of their way to punish Smith and have his license revoked. The state investigators (with 20/20 hindsight) performed their analysis and took steps that were outside of the scope of typical appraisal practice. Examples of this include the fact that the court stated that Smith should have considered “as a benchmark” comparable, Donald Trump’s residence in Florida which sold for $95,000,000 (the subject property is in California). The investigator also retained an expert witness from a governmental agency to testify about potential zoning issues and why Smith did not accurately consider the potential future zoning of the property.

My comment: Long detailed case study of the disciplinary case above. Worth reading to see what happens from beginning to end including the comments by the author and expenses for the state. I have been hearing for quite a while about aggressive state regulators. I quit doing any dollar adjustments two years ago on my form report appraisals, except market conditions, because our state regulator wants to see support for them. I should have quit doing them years ago. I did not need them, except where one factor significantly affected the value. 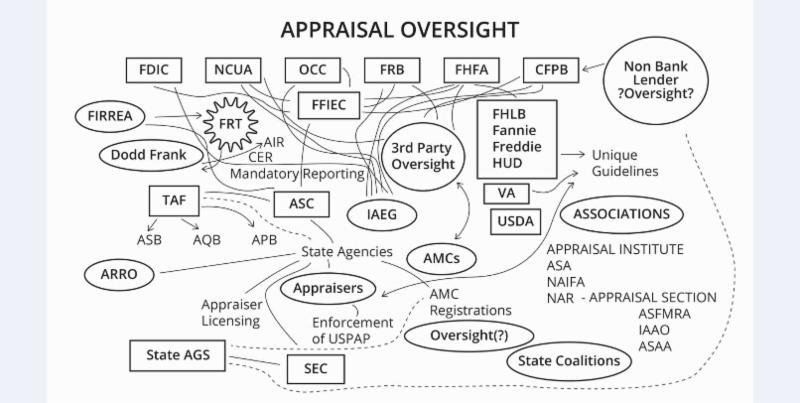 My comment: I don’t remember where this originally came from, but I Love It!

In the paid Appraisal Today

Coming in the November 2016 issue,

To read the November articles, plus 2+ years of previous issues, subscribe to the paid Appraisal Today.

If you are a paid subscriber and did not get the October 2016 issue, emailed October 3, 2016, please send an email to info@appraisaltoday.com and we will send it to you!! Or, hit the reply button. Be sure to put in a comment requesting it ;>

A Nation United – and Divided-by Our Homes’ Architectural Styles

Here’s what we found: some seemingly ironclad regional preferences. Some changes. A few surprises. And one clear winner for the title of the American home.

Most regional architectural styles in the United States have their roots both in history and in the environment: They grew out of the types of building materials, such as stone, wood, or clay (for bricks), that were readily available during the early period of development, and the climates that these homes were constructed to withstand, says architect Mark Hogan of OpenScope Studio in San Francisco. They were also often reminiscent of popular styles in the regions where the builders and buyers hailed from-including European influences for Spanish, French, and Tuscan-style homes.

Cape Cod homes, named for the strip of land defining Massachusetts Bay, where they first became popular, are plentiful as far west as the Mississippi River, but their presence remains strongest on their home turf of New England. And the prevalence of rustic cabins maps pretty well onto the locations of the Appalachian, Rocky, and Sierra Nevada mountain ranges.

My comment: Fascinating!! Appraisers look at architectural styles all the time, but few know these interesting geographic and historical details.

The U.S. Department of Veterans Affairs in July launched an appraiser recruitment drive to increase the size of its Fee Panel.

Click the link below for the full story from the Appraisal Institute’s “Washington Report & State News” including links for more info:

My comment: VA appraisal fees are up all over the country – $800 in Washington state, for example and $450 in CA. The VA is the best place for fee appraisers who do lender work. No AMC hassles, etc. There are some positives and some negatives. I have never done VA appraisals, so I interviewed fee appraisers, VA staff, etc. and wrote an article about it in my paid newsletter June, 2014 issue: “VA is looking for fee appraisers! C/R fees and no AMCs!!” Not much has changed since then.

VA previously put out a call for appraisers in April, 2016.

Info at http://appraisersblogs.com/va-recruiting-appraisers-shortgage . More counties were added in July 2016.

HOW TO USE THE NUMBERS BELOW. Appraisals are ordered after the loan application. These numbers tell you the future for the next few weeks. For more information on how they are compiled, go to https://www.mba.org

Note: I publish a graph of this data every month in my printed newsletter, Appraisal Today. For more information or get a FREE sample issue go to www.appraisaltoday.com/products or send an email to info@appraisaltoday.com . Or call 800-839-0227, MTW 8AM to noon, Pacific time.

according to data from the Mortgage Bankers Association’s (MBA) Weekly Mortgage Applications Survey for the week ending October 14, 2016. This week’s results included an adjustment for the Columbus Day holiday.

The average contract interest rate for 30-year fixed-rate mortgages with conforming loan balances ($417,000 or less) increased to its highest level since June 2016, 3.73 percent, from 3.68 percent, with points increasing to 0.36 from 0.35 (including the origination fee) for 80 percent loan-to-value ratio (LTV) loans. The effective rate increased from last week.

The average contract interest rate for 30-year fixed-rate mortgages with jumbo loan balances (greater than $417,000) increased to its highest level since June 2016, 3.72 percent, from 3.67 percent, with points increasing to 0.29 from 0.24 (including the origination fee) for 80 percent LTV loans. The effective rate increased from last week.

The average contract interest rate for 30-year fixed-rate mortgages backed by the FHA remained unchanged at 3.54 percent, with points increasing to 0.30 from 0.23 (including the origination fee) for 80 percent LTV loans. The effective rate increased from last week.

The average contract interest rate for 15-year fixed-rate mortgages increased to its highest level since June 2016, 3.03 percent, from 2.97 percent, with points decreasing to 0.27 from 0.34 (including the origination fee) for 80 percent LTV loans. The effective rate increased from last week.

The average contract interest rate for 5/1 ARMs increased to its highest level since May 2016, 2.97 percent, with points increasing to 0.41 from 0.28 (including the origination fee) for 80 percent LTV loans. The effective rate increased from last week.