Are Human Appraisers Being Phased Out?

Are Human Appraisers Being Phased Out? Federal Regulators Vote to Loosen Requirements

Excerpt: What’s that drone doing hovering over a property?
Soon that sight may be the norm on homes for sale.
The days of human appraisers may be coming to an end for homes priced under $400,000, if regulation proposed by the Office of the Comptroller of the Currency, the Federal Deposit Insurance Corp. and the Federal Reserve gets approved.
Previously, only homes valued under $250,000 could be purchased or sold without the use of a human appraiser. That threshold is potentially being raised to $400,000, opening up more business for drone-monitored and computer-generated home valuations. The vote is nearly there, awaiting expected agreement from the Federal Reserve before the regulation takes effect.
While the appraisal industry is concerned the change could negatively impact real estate at large, the brokerage side of the business predicts the threshold hike should have minimal effects on homeownership and the home-buying experience.
Comments from many sides of the issue and lots of comments by readers.
To read more, click here

NOTE: Please scroll down to read the other sections of this long blog post on suburbs, trainees, evaluations, mortgage origination stats, etc.

Subscribe to this blog (upper right of this page) and get all the posts emailed when they are posted!! 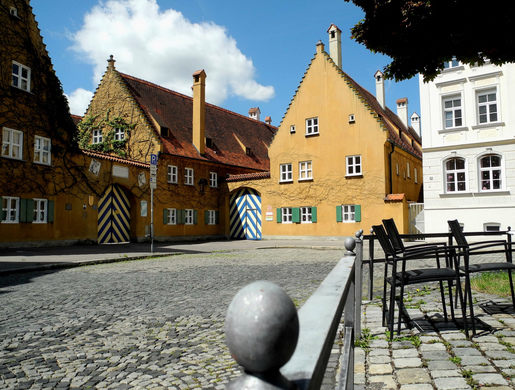 In this truly magical place, rent hasn’t been raised since the year 1520! Just For Fun!!

Excerpts: After minting coins for the Vatican and making a name for himself as one of Europe’s greatest early entrepreneurs, Jakob Fugger (aka “Jakob the Rich”) turned his eye toward those in need. What emerged from this vision has persisted as the world’s oldest charitable social housing com
plex.
In the year 1517, construction began on Fugger’s vision for what would become the golden-walled enclave of Fuggerei, which he created as a way of providing affordable homes for day laborers, artisans and their families. Though it sustained heavy damage during a bombing raid in WWII, the community was restored to its pre-raid condition, where it has remained uninterruptedly inhabited since its founding in 1520. The city-within-a-city consists of private residences including 67 houses, 147 apartments, St. Mark’s Church, and an administrative building.
To read more, click here
My Comment: Wow!! Really gives me a perspective on rent control here in California and in my small city. Rents are increasing all over the country.
==========================================

Excerpt: Buzz: Why have FRTs recently become another “hot button” issue for appraisers? In what ways have FRTs recently raised issues with policies and/or appraisers?
John: I think this issue has legs because not many people, even within the regulatory community, understand why the definition is important – especially in light of the 1994 interagency regulations that to a large degree mooted the definition and, as a result, Congress’s intent when it originally passed Title XI of FIRREA.
For example, the recent North Dakota appraiser credentialing waiver only affects FRTs. But an FRT, under the 1994 regulations, essentially means the waiver only applies to portfolio loans above the residential appraisal threshold. So, what, we went through a waiver process for a miniscule amount of lending activity in the state of North Dakota? Especially when paired with the relief afforded by Senate Bill 2155, it marks a Pyrrhic victory at best. Had the parties involved understood how little the world would change under the waiver process, they may have chosen a different course of action in dealing with their issues regarding appraiser availability.
To read more, click here
Good definition and explanation of FRTs. Worth reading.
To read more, click here
My comments: there is still confusion among appraisers about what an FRT is. Unfortunately, the post above does not discuss that, but gives background on what it means. My definition and info link above has lots more on FRTs from the Appraisal Institute, including changes since FRTs started in FIRREA in 1989.
==========================================

Why so many suburbs look the same

By Julie Friess, SRA, AI-RRS, MA
Excerpt: Fees?
I had an AMC offer me one of these and try to sell me on it with this
statement, “You can complete this report in one half hour and we will pay you $45.”
No, I can’t. If you can, but complete it correctly, then go ahead and do it. I can’t. I decided to binge-watch Netflix instead. At least by doing that I didn’t have to worry about an Appraisal Board complaint or a lawsuit in a year or two because I decided I needed $45 now?
That’s not even the deductible to take myself to the doctor or the gas it would cost me to attend the initial file review for the Appraisal Board complaint? What was that saying Nancy Reagan was trying to push in the 80’s… “Just Say NO!”
To read the full article (coming in the Sept. issue) with lots more commentary, plus 2+ years of previous issues, subscribe to the paid Appraisal Today.
If this article helped you decide if you do or don’t want to do bifurcated appraisals, it is worth the subscription price!!
Cancel at any time for any reason!!!
$8.25 per month, $24.75 per quarter, $89 per year (Best Buy)
or $99 per year or $169 for two years
Subscribers get, FREE: past 18+ months of past newsletters
To purchase the paid Appraisal Today newsletter go to
www.appraisaltoday.com/products  or call 800-839-0227.
What’s the difference between the Appraisal Today free weekly email newsletters in this blog and the paid monthly newsletter?
Click here for more info!
If you are a paid subscriber and did not get the Septmber 2019 issue, emailed Tuesday September 3 2019, please send an email to info@appraisaltoday.com and we will send it to you!! Or, hit the reply button. Be sure to put in a comment requesting it.
==========================================