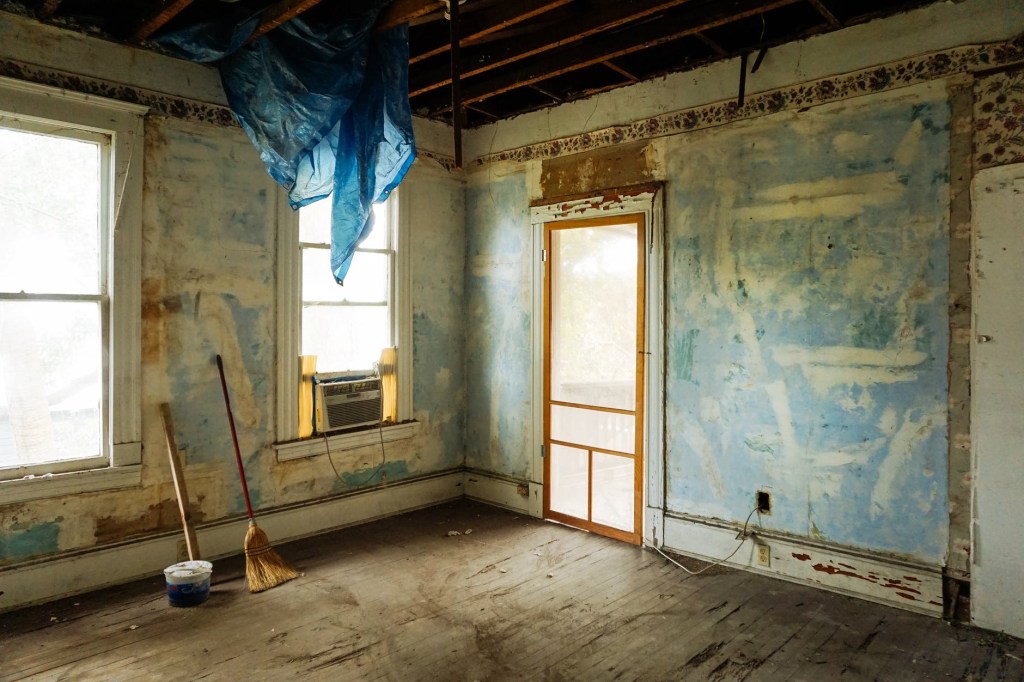 Excerpt: On a regular basis, I appraise homes that need some type of repair. It may be as simple as replacing an outlet or as complicated as renovating a home. In the appraisal process, the appraiser has to estimate a cost to cure many types of repairs.

Why do appraisers use the term, cost to “cure” instead of a cost to “fix” a repair? Are appraisers just trying to use fancy vernacular to try and impress the reader of the report?

Appraisers think in terms of value. The term “cure” may make you think of someone who suffers from an illness for which a cure is desired. Appraisal Cost to Cure is very different.

To read more and watch the very funny 3-minute video near the end, click here.

My comments: Written for homeowners. This very good for appraiser marketing. But, there are lots of reminders and maybe some new ideas for appraisers.

The best part: The “Weird Al Yankovic” Handy 3 minute video at the end. Very, very funny. Total Escape!! Just what I needed for the election ;> I have been following Weird Al for decades.

Unfortunately, I cannot insert a video into these emails.

If you don’t have time to read the blog post, to watch the 3-minute video, click here

What’s the appraisal definition for suburban?

The United States is a land of suburbs, with just one problem: No one’s quite clear what a “suburb” is.

It’s a question of semantics with real-world implications, as government programs, political campaigns and developers try to spend money in the “suburbs,” where a majority of Americans say they live despite the category having no formal definition.

For some people, it’s obvious: A suburb is a smaller city on the periphery of a larger city. Or it’s a sprawling neighborhood filled with vast swathes of single-family homes. Still other more dated conceptions of suburbia in the popular mind involve the people who live there: allegedly white, middle class and socially homogenous.

My comments: Of course, if you do residential lender appraisals this is a Very Big Issue due to lender “requirements” such as no rural properties. Lots and lots of online discussion about this for a long time. Post this topic on your favorite Internet chat site or email list… and wait for the wide variety of opinions!!

(This has been floating around for many years…)

There are other variations, of course, that are not suitable for this newsletter ;>

Fantastic!! Made me smile. Regular people.

Many thanks to John Regan, a long time subscriber and big opera fan!

COVID Risk When Appraising Apartments and Commercial Properties
For Covid Updates, go to my Covid Science blog at covidscienceblog.com

6 Reasons Appraisers Are NOT Needed

Appraisers Are NOT Needed???

Excerpt: You can buy a car in little to no time so why not a house? Over the years I have heard that the home buying process is too long. There are too many headaches for buyers and the process should be easier.

We are in a microwave society and everybody wants things instantly. This should, of course, carry over to the home buying process, right?

A house is probably the most expensive purchase people will ever make but that doesn’t mean that the process needs to consume your entire life, right? The appraiser just adds to the stumbling block that most home buyers face in getting into the house of their dreams. Today I am going to discuss 6 reasons that appraisers are not needed (wink, wink) in the home buying process.

Written for home buyers but good explanations for appraisers to use.

My comment: I have appraised many apartment properties. 2-4 unit properties are more difficult to appraise than a 60 unit apartment building, which I appraised recently! Owner occupants, motivations, etc. are big issues. 4 units are the most difficult.

My city has had rent control, which keeps getting stricter, for 4 years. CA recently passed rent control for the state. Must use actual, not market, rents in appraisals. Very, very difficult to appraise. 3 weeks ago I decided not to do them any more.

But, last week a family was thinking about selling their 4 unit property. I pre-screened them. If it had low rents, I don’t know who would buy it. Fortunately the rents were around 80% of market. They wanted to know if it was good time to sell. I told them I would let them know, then do the appraisal. Not a good market now.

I met one of the owners this week at the inspection. He brought a copy of the 2005 date of death appraisal and asked for an “update” or an “evaluation”, for a lower fee, which his sisters requested. I told him I could not do it and did not know any licensed appraiser who would do it. And told him to use a local real estate agent for free. I doubt if they would recommend not listing now as I speak with them regularly at open houses. 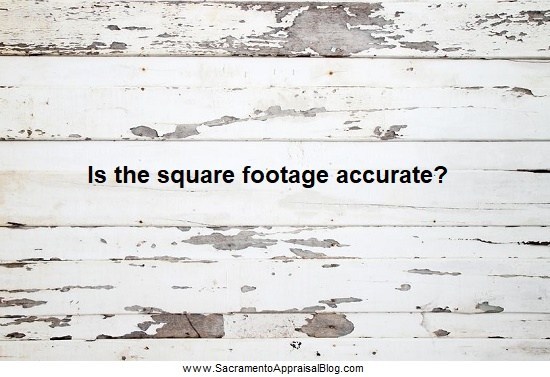 Tax Records is not the definitive source for square footage!

Why is the appraiser saying it’s only 1,400 sq ft? Tax Records shows the home is 600 sq ft larger. This issue comes up ALL the time, so let’s talk about it. Tax records and Square Footage in Appraisals is a hot topic.

The truth: The Assessor’s records are generally reliable, but I’m just saying sometimes they’re not. Why is this? At times it’s as simple as the original builder not turning in accurate information when a house was built. Or maybe an owner took out permits but official records were never updated. Of course we’ve all seen instances where the tax roll shows two units on one lot, but there’s really just one house nowadays. Let’s not forget sometimes owners do an addition without permits, so the Assessor might actually be correct even though the house is technically larger or has even sold on MLS as a larger home. For reference, here are ten reasons why an appraiser’s sketch might be different.

For lots of comments and more info, click here

My comment: This one of the main reasons that AVMs will never be very successful for all homes. Over and over again, statistical analysis shows GLA is the most important physical feature overall.

Also, how bedrooms are determined varies a lot, depending on the local market and can vary over time. The assessor number of bedrooms may not match the appraiser’s. For example, tandem rooms. Finished basements can vary also.

I started appraising at a CA assessor’s office in 1976. In CA, State Board of Equalization regulated county assessors offices, so the procedures and terminology are very similar all over the state. However, GLA from the assessor may have different requirements than other sources, such as ANSI.

Proposition 13 passed in 1979, which only allowed an annual 2% increase in assessment per year, unless there was a sale or improvements (determined by permits). Over time, the information has become more and more out of date.

Data is not available for smaller counties if the assessor says it is confidential. Until the 90s, my county did not release any data, so I had to “guesstimate” on square footage for sales and listings. We finally got it when an MAI was elected assessor.

In the early 90s, I researched assessors records around the country. In some small rural counties the records were kept at the assessor’s home. They were not digitized and available for purchase by data companies.

Appraisers need to know which areas are not accurate. Sometimes GLA is “political”. Within a city, accuracy can vary. In my city the least accurate records are in the “Gold Coast” with many of the city’s larger, historic homes. In other nearby cities, some properties have low GLAs to keep the property taxes lower.

What is Included in Appraisal Square Footage?(Opens in a new browser tab)

How accurate is the reported square footage from the tax records in your primary service area?(Opens in a new browser tab)

Are Human Appraisers Being Phased Out?

Are Human Appraisers Being Phased Out? Federal Regulators Vote to Loosen Requirements

Excerpt: What’s that drone doing hovering over a property?
Soon that sight may be the norm on homes for sale.
The days of human appraisers may be coming to an end for homes priced under $400,000, if regulation proposed by the Office of the Comptroller of the Currency, the Federal Deposit Insurance Corp. and the Federal Reserve gets approved.
Previously, only homes valued under $250,000 could be purchased or sold without the use of a human appraiser. That threshold is potentially being raised to $400,000, opening up more business for drone-monitored and computer-generated home valuations. The vote is nearly there, awaiting expected agreement from the Federal Reserve before the regulation takes effect.
While the appraisal industry is concerned the change could negatively impact real estate at large, the brokerage side of the business predicts the threshold hike should have minimal effects on homeownership and the home-buying experience.
Comments from many sides of the issue and lots of comments by readers.
To read more, click here

Hobbit House of Montana(Opens in a new browser tab)

Generally speaking, how accurate do you find MLS data in your area?

City and building maps for appraisers

13 of the Craziest/Coolest Public Bathrooms

Excerpt: We know, there is a lot to hate about public restrooms, but we’ve found they can actually be a very unexpected but very potent source of inspiration. We’ve never seen tile layouts like the ones in public facilities-and that’s why we like them. Overlapping squares with zigzag edges? A woven look with a whopping five different colors and two different tile sizes?
https://www.architecturaldigest.com/story/cool-public-bathroom-design
My comment: Wow! Vibrant colors and tiles….
Very unusual bathrooms for appraisers(Opens in a new browser tab)
Very Strange Appraisal Adjustments(Opens in a new browser tab)