What is an Appraisal “Inspection”?

Excerpts: Why are these roles often confused? What is an Appraisal “Inspection”?

The root of many misconceptions about the appraisal inspection is the word “inspection” itself. It is true that as part of the appraisal process, the appraiser might perform some sort of onsite quality, condition, and functional utility survey of the property to determine its relevant characteristics and if it meets certain standards. For example, to the general public, the FHA requirements that an appraiser must operate certain systems in the home (plumbing, electrical, HVAC) seems similar to what a licensed home inspector does.

“The act of looking at something closely in order to learn more about it, to find problems, etc.; the act of inspecting something”

It’s somewhat of a benign definition, is it not? There’s nothing really scary there, yet many appraisers attempt to avoid confusion, and (potentially) limit their liability, by avoiding use of the word “inspection” entirely. Many appraisers use euphemisms for this term in their appraisal reports, such as “property visit” or “viewing.”

Even FHA got into the euphemism game with the publication of Handbook 4000.1, which went into effect in 2015. The words “inspect” or “inspection” generally do not appear in reference to an appraiser’s obligations. Instead, the words “observe” and “observation” are used.

My comments: USPAP has never required an inspection. USPAP defines “Personal Inspection” as the following: a physical observation performed to assist in identifying relevant property characteristics in a valuation service.”

The word “inspection” is used in various locations, such as Advisory opinion A02, including Minimal level of Inspection.

The fourth exposure draft for the 2023 version has Section 1: “Review of Requirements about Disclosing a Personal Inspection.” Final comments deadline is today, July 23, 2021.

What are Pass through Bedrooms for Appraisals 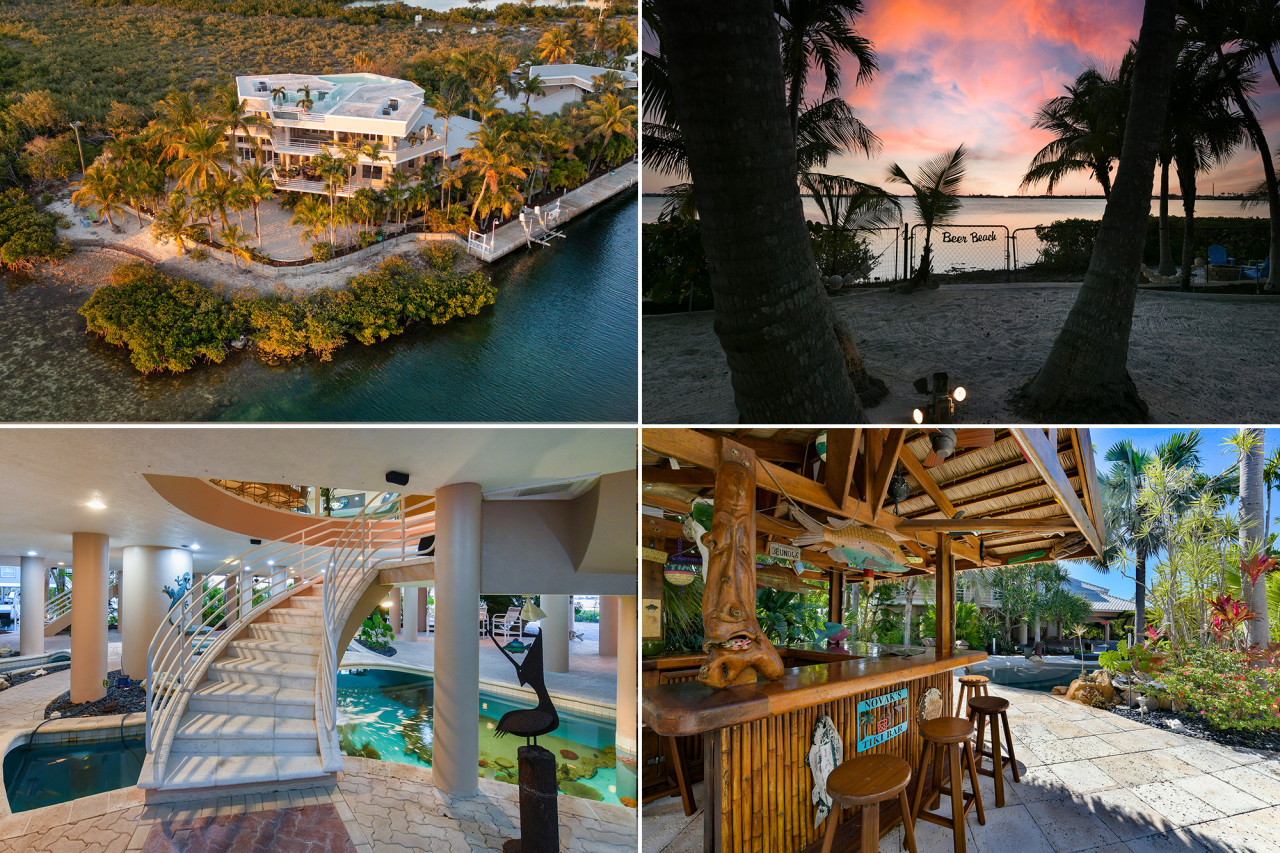 Excerpts: The main house has three bedrooms, 5.5 bathrooms, and 5,300 square feet of space, on nearly an acre. There’s also a one-bedroom apartment above the garage.

The stilted house was built in 1996, and the snorkel aquarium sits under it, near a circular driveway that features a bronze and concrete sculpture.

The tremendous tank was featured a few years ago on National Geographic’s “Fish Tank Kings,” when the home’s previous owner wanted to clean up and repair the enormous aquarium.

The home faces direct west and is directly on the ocean. From most of the rooms in the main home, you have sunset views.”

To read more and see many photos and a few videos, click here

Today, the Federal Housing Administration (FHA) published a new update to the Single Family Housing Policy Handbook 4000.1 (Handbook 4000.1). The updates include enhancements and revisions to existing guidance as well as various other technical edits. In most cases, however, this newly added language augments and enhances existing policy. FHA remains committed to making it easier for mortgagees to conduct business by maintaining and enhancing Handbook 4000.1 with regularly scheduled updates to ensure it remains the comprehensive source of policy guidance for single family mortgage originators, servicers, and other stakeholders.

To read the full announcement above with links, click here

Search for “apprais” to find the relevant changes.

My comments: Always good to have the latest PDF version of 4000.1 to search for what you need. I used the highlighted version to look for any appraisal changes. Here are a few:

I didn’t have time to check the entire document, but there are not many changes overall.

Most metros in the US have become more segregated since 1990

Excerpts: More than 80 percent of metropolitan regions in the United States have become more segregated in recent decades despite policy efforts aimed at promoting integration, with the most highly segregated areas located in midwestern and mid atlantic states, according to a new study from UC Berkeley’s Othering & Belonging Institute.

“The Roots of Structural Racism: Twenty-First Century Racial Residential Segregation in the United States,” shows that between 1990 and 2019, 169 out of the 209 metropolitan regions in the United States with populations above 200,000 people have increased in their levels of segregation, which correlated with poorer life outcomes, particularly for people of color, in terms of health, educational attainment, economic mobility, and much more.

Just 40 regions have become less segregated, according to the analysis, which was based on official US Census data.

A central component of this project is an interactive national segregation map which shows the levels of segregation in hundreds of cities and metropolitan areas across the country, and allows users to toggle between different decades to show changes in segregation.

Using the map, users can zoom in on different regions of the country to see how a metropolitan region which may be thought of as diverse is actually highly-segregated when inspected at a city level. This is revealed by the different colors assigned to different cities based on their levels of segregation.

The two paragraphs below were added by me.

Some of the most segregated areas included Chicago, Milwaukee and Detroit in the Midwest and New York, northern New Jersey and Philadelphia in the mid-Atlantic.

To use the Map to Search by address, cities, census tract, etc, click here.

Link to original research with lots of detail click here

My comments: Appraisers did not cause this!! This study received much less publicity than the Black homeowners who said their homes were appraised too low, of course.

Fascinating! Using the map, I first entered my own address, of course. There were changes over time in some parts of my city between 1980 and 2019.

Does it need a closet to be a bedroom? 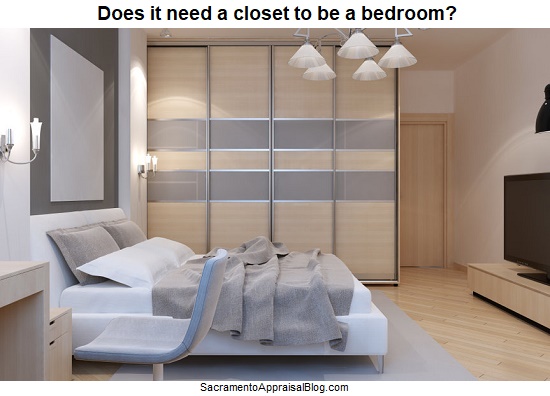 No closet rule: The truth is there isn’t any formal one-size-fits-all definition of a bedroom that states a closet is necessary. For reference, International Residential Code does NOT mandate a bedroom to have a closet. I find local code is sometimes vague about bedrooms too without a strong emphasis on mandatory closets.

The big issue (the market): Ultimately a bedroom should probably have a closet because that’s what buyers typically expect. In other words, buyers expect for closets to be present, new homes are built with closets, and it’s hands-down normal to have closets. So while a closet might not technically be required by code, the market likely requires one.

My comments: What is a bedroom is a very controversial and confusing topic to many people. The number of bedrooms is important in many markets. In my city, there are many Victorian homes without closets. Some have added armoires. I count them as bedrooms. The February 2019 issue of the monthly Appraisal Today had “What is a Bedroom” by Doug Smith, SRA, plus my comments. It is a long article about building codes, septic tanks and leach fields, closets, FHA, etc.

Excerpt: What Happened? A fee that increased added half a point in upfront cost to most conventional refinances has been removed by FHFA (Fannie and Freddie’s regulator).

What does “half a point upfront” mean?

For what loans? When?

… this only applies to most conventional refinance loans delivered to the agencies on or after August 1st. It would be very hard to close a new refi before then, let alone deliver it to the agencies, so most lenders have already implemented the change for all new loans.

My comments: Loan volume will definitely pick up, especially for refis. Some AMC appraiser fees are going way up, even to “whatever you want to charge.” I hear $1,000 in local areas. Other appraisers are charging $500. Fees are often high for purchases that are very time sensitive. Who pays the increased fees? Sometimes the borrower. Sometimes the AMC. RAISE YOUR FEES!! AMCs are not loyal and will forget you when business slows down. AMCs are even sending me lots more email solicitations for residential and commercial loans. I delete them.

The difference between VA fees (which have not changed much) and conventional appraisals is getting larger and larger. Commercial appraisals have finally picked up. Hopefully, their fees will go up finally. I quit doing them because of low fees and too much work.

Maybe it’s time for you to refi. I gotta do it myself!!

HOW TO USE THE NUMBERS BELOW. Appraisals are ordered after the loan application. These numbers tell you the future for the next few weeks. For more information on how they are compiled, go to www.mbaa.org Note: I publish a graph of this data every month in my paid monthly newsletter, Appraisal Today. I have been tracking this data since 1993. For more information or get a FREE sample issue go to https://www.appraisaltoday.com/products.htm or send an email to info@appraisaltoday.com . Or call 800-839-0227, MTW 7 AM to noon, Pacific time.

WASHINGTON, D.C. (July 21, 2021) – Mortgage applications decreased 4.0 percent from one week earlier, according to data from the Mortgage Bankers Association’s (MBA) Weekly Mortgage Applications Survey for the week ending July 16, 2021. The previous week’s results included an adjustment for the Fourth of July holiday.

“The 10-year Treasury yield dropped sharply last week, in part due to investors becoming more concerned about the spread of COVID variants and their impact on global economic growth. There were mixed changes in mortgage rates as a result, with the 30-year fixed rate increasing slightly to 3.11 percent after two weeks of declines. Other surveyed rates moved lower, with the 15-year fixed rate loan, used by around 20 percent of refinance borrowers, decreasing to 2.46 percent – the lowest level since January 2021,” said Joel Kan, MBA’s Associate Vice President of Economic and Industry Forecasting. “On a seasonally adjusted basis compared to the July 4th holiday week, mortgage applications were lower across the board, with purchase applications back to near their lowest levels since May 2020. Limited inventory and higher prices are keeping some prospective homebuyers out of the market. Refinance activity fell over the week, but because rates have stayed relatively low, the pace of applications was close to its highest level since early May.”

The average contract interest rate for 30-year fixed-rate mortgages with conforming loan balances ($548,250 or less) increased to 3.11 percent from 3.09 percent, with points increasing to 0.43 from 0.37 (including the origination fee) for 80 percent loan-to-value ratio (LTV) loans. The effective rate increased from last week.

The average contract interest rate for 30-year fixed-rate mortgages with jumbo loan balances (greater than $548,250) decreased to 3.13 percent from 3.16 percent, with points increasing to 0.32 from 0.27 (including the origination fee) for 80 percent LTV loans. The effective rate decreased from last week.

The average contract interest rate for 30-year fixed-rate mortgages backed by the FHA decreased to 3.08 percent from 3.15 percent, with points increasing to 0.31 from 0.29 (including the origination fee) for 80 percent LTV loans. The effective rate decreased from last week.

The average contract interest rate for 15-year fixed-rate mortgages decreased to 2.46 percent from 2.48 percent, with points decreasing to 0.30 from 0.32 (including the origination fee) for 80 percent LTV loans. The effective rate decreased from last week.

The average contract interest rate for 5/1 ARMs decreased to 2.74 percent from 3.02 percent, with points decreasing to 0.19 from 0.32 (including the origination fee) for 80 percent LTV loans. The effective rate decreased from last week.