A man cave usually develops in spare rooms, such as bedrooms, offices, finished basements, or recreation rooms. The garage, another traditionally masculine space, is more often a workshop or place to make repairs. Its connotation with work (often frustrating and unsavory as any viewer of Home Improvement can attest) as well as its thermal issues (it’s rarely cooled or heated like the rest of the house) demarcate it from the man cave, an interior space.

While men have always had their sacred spaces in the home such as the garage or study, the domesticity of the 19th and early 20th century overall implied that the home was, of course, the woman’s place. In the previous centuries, men sought refuge outside the home in establishments such as gentlemen’s clubs (think more country club than strip club), and male-only social clubs and establishments such as the Freemasons.

My comment: I live in California, where there are few basements. I do see garage “man caves”. But, they are not as fixed up as basements, mostly with a tv, beer fridge and some tools. Sometimes I see bedrooms set up as computer rooms.

My comments: This is advisory and not part of USPAP. Finally the Appraisal Practices Board has 48 pages of practical advice for practicing residential appraisers, the vast majority of appraisers. It discusses what different types of clients want, such as Fannie, VA, Rels, relocation, data, data collection, CU, etc. Scope of work examples are included. The last 17 pages are about verification. Worth reading.

When you look up Zillow’s estimate for the house you want to buy – which the company calls a Zestimate – and demand that the seller give you a lowball price because of Zillow, you’re driving your agent crazy.

When you insist on selling your house at an exaggerated Zestimate, you’re driving your agent crazy.

When you completely ignore a Zestimate because it doesn’t favor you? You guessed it. Crazy.

Zillow acknowledges the national median error rate for its Zestimate is 7.9 percent.

My comment: lots of home owners use Zillow to find out what their homes are worth. Sometimes they tell me their zestimate. I then explain the limitations of Zillow. Even attorneys use Zillow. I recently appraised a 15-property estate where the attorneys used Zillow for their preliminary valuations. When I completed my appraisals I had to explain why I was different from Zillow. Since they were almost all built prior to 1930, needed work and 3 were multifamily, Zillow was not very accurate. My total value was similar to Zillow’s, so my values were okay with the attorneys. Very scary.

Since President-elect Donald Trump has scarcely spoken on housing policy during his campaign, the news of his winning the presidency early Wednesday morning has had analysts widely speculating on what the next four years will hold for housing industry regulation

One thing is certain, Trump has openly stated his belief that the financial industry, and housing in particular, is over-regulated and that he plans to overhaul the Dodd-Frank Act of 2010, which the Obama Administration considers to be one of its greatest victories. Trump, a real estate entrepreneur by trade, has made it clear that he will review all regulations that the Obama Administration put in place.

Former Congressman Barney Frank (D-Massachusetts), one of the architects of the Dodd-Frank Act, told MReport that it is too soon to make any determination as to Trump’s effect on regulation, but did say, “Trump will want to cut back. I also think he will appoint people who won’t want to use the power very much.”

Frank continued, “His views are not as developed as the Republican members of Congress. That’s something he’s going to have to work out with them.”

The PHH ruling that put the Consumer Financial Protection Bureau under the authority of the president seemed like a nonevent given a Clinton victory – it’s not like she was going to disband the regulatory agency birthed by Elizabeth Warren. Any change to the status quo was kicked down the road by at least four years.

Except Trump won. And Republicans have control of the Senate and the House.

What is the scene like at the CFPB this morning? Is Cordray cleaning out his desk? And what in the world are lenders and servicers supposed to do now?

It was recorded in 2010, but is very relevant now. It was released yesterday. Freakonomics is my favorite podcast. If you like this episode, subscribe to the podcast. There are links at the top of the article. I listen to podcasts when I drive and when I exercise. Lots better than radio as I choose what I listen to. Of course, I usually shut it off when I am driving down a street looking for a teeny (or no) address for a comp ;>

Listen to it here:

Why were the presidential election predictions so far off? Reliance on flawed data that was missing significant factors, just like before the 2008 mortgage meltdown when no one listened to appraisers and just looked at the data.

Before the meltdown, the “quants” kept saying everything was okay with the mortgage markets. They did not include the Great Depression. Appraisers kept saying that mortgage brokers were getting inflated appraisals. Also, there were lots of CPAs creating bogus self employment tax returns.

Interesting article on who got it right – Trump’s data people

How does this apply to appraising? As we all know, property data is flawed from MLS and public records. Residential real estate is a very imperfect market, with significant local factors that may not be quantifiable. UAD does not include important data, such as school district.

When Fannie and Freddie start buying lots of loans loans without appraisals and relying on flawed or missing data, they will be taking a big risk again as their data is flawed.

In the paid Appraisal Today

* Not every difference needs an adjustment

Identify the significant components of value and focus on analyzing their impact. The technical term for what we adjust for in the grid is elements of comparison. The typical buyer for a house cares about house size, condition/upgrades, location-influences, and sometimes site-area differences. In my practice, I try to focus on the significant elements that affect value. Those are the items that, if I get right, I’m confident that my value conclusion will be reasonable and credible.

Ask yourself the question for your market, “Does a buyer really care about a fireplace, and if so, can I reasonably estimate its contributory value?” Does the market react to smaller differences in lot size? Some of us may have been trained that such adjustments are necessary. We need to break-out of this mindset and consider focusing on adjustments for those items that make a difference.

This goes to client’s expectations. Sometimes I spend more time explaining why an adjustment is not applied than I do discussing the analysis for an adjustment I did apply.

My comment: This article has lots of practical tips on adjustments. Well worth the cost of a subscription, especially for $8.25 per month to get all the back issues. I still speak with appraisers who have not gotten Denis’ message and keep putting lots of adjustments in their appraisals.

In the December 2015 issue of the paid Appraisal Today, available to paid subscribers.

To read the full article with lots more tips on adjustments, including using statistics software and matched paired sales, plus 2+ years of previous issues, subscribe to the paid Appraisal Today.

If this article saved you time by not trying to support adjustments that are not needed, it is worth the subscription price!!

Why does it take so long to close a loan? – Appraisers

Recent data from Ellie Mae showed that it takes about a month and a half on average to close a mortgage loan.

Several speakers at Wednesday’s housing summit hosted by the Urban Institute and CoreLogic, including Quicken Loans CEO Bill Emerson, said that closing times could conceivably be much shorter than that, even as little as 10 days.

“How much time does someone inside a lender actually work a loan file in the 30 days it takes to close a loan?,” Emerson asked the crowd of housing insiders. “3-5 days,” he answered. “There’s a lot of time that can be taken out of that process. But it’s going to take a lot of work to get to 15 days, let alone, 20 days or 25 days.”

The “lot of work” Emerson is referring to is the cumbersome appraisal process, which is hamstrung by a spider web of regulatory oversight that makes it hard to improve the process.

(Jordan) Petkovski said one way to address the problem is to empower appraisers to do their jobs. “We need a reduction in the back and forth that exists in appraisals,” Petkovski said.

The story also included the great graphic of all the appraisal regulations I included a few weeks ago. The image was originally presented by Joan Trice of the Alterra Group at the AEI and CRN conference in October 2016, per the story. Here is the graphic. 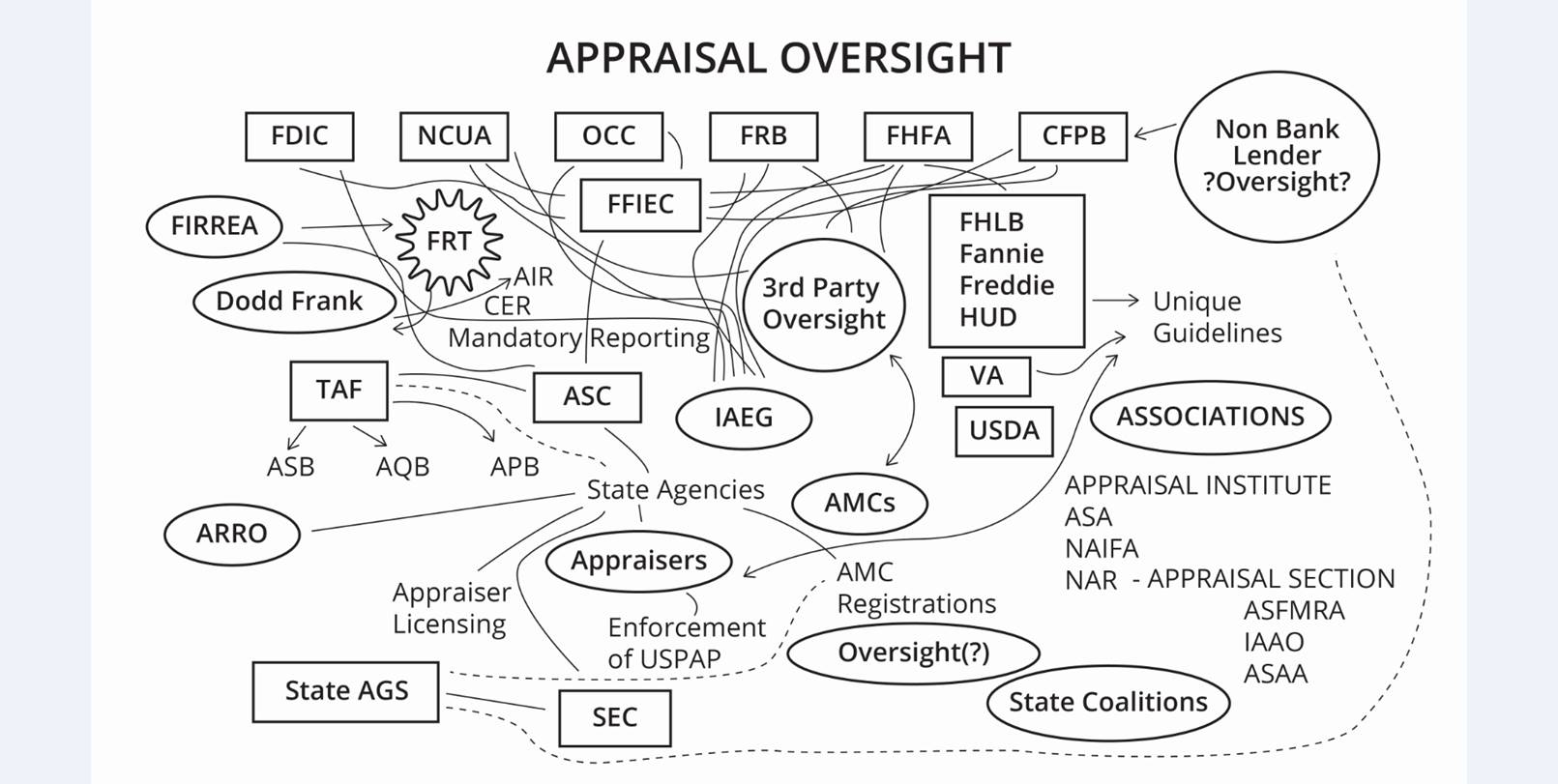 – Appraisers Are Not Good At Being Criminals, Just Like to Appraise. (A sad story, heard many times.)

Excerpt: The ringleader in these schemes makes off with tens of millions of dollars while the appraiser that enabled the deal got 20 more assignments at $300 a pop.

Go to this link and scroll down to Appraiserville. Be sure to check out some of the graphs and comments as you scroll down.

HOW TO USE THE NUMBERS BELOW. Appraisals are ordered after the loan application. These numbers tell you the future for the next few weeks. For more information on how they are compiled, go to www.mbaa.org

Note: I publish a graph of this data every month in my printed newsletter, Appraisal Today. For more information or get a FREE sample issue go to https://www.appraisaltoday.com/products.htm or send an email to info@appraisaltoday.com . Or call 800-839-0227, MTW 8AM to noon, Pacific time.

according to data from the Mortgage Bankers Association’s (MBA) Weekly Mortgage Applications Survey for the week ending November 4, 2016.

The average contract interest rate for 30-year fixed-rate mortgages with conforming loan balances ($417,000 or less) increased to its highest level since June 2016, 3.77 percent, from 3.75 percent, with points increasing to 0.38 from 0.36 (including the origination fee) for 80 percent loan-to-value ratio (LTV) loans. The effective rate increased from last week.

The average contract interest rate for 30-year fixed-rate mortgages with jumbo loan balances (greater than $417,000) increased to its highest level since June 2016, 3.75 percent, from 3.74 percent, with points decreasing to 0.27 from 0.32 (including the origination fee) for 80 percent LTV loans. The effective rate remained unchanged from last week.

The average contract interest rate for 30-year fixed-rate mortgages backed by the FHA increased to its highest level since June 2016, 3.61 percent, from 3.59 percent, with points increasing to 0.35 from 0.33 (including the origination fee) for 80 percent LTV loans. The effective rate increased from last week.

The average contract interest rate for 15-year fixed-rate mortgages decreased to 3.03 percent from 3.04 percent, with points increasing to 0.38 from 0.36 (including the origination fee) for 80 percent LTV loans. The effective rate decreased from last week.

The average contract interest rate for 5/1 ARMs decreased to 2.92 percent from 2.97 percent, with points increasing to 0.47 from 0.40 (including the origination fee) for 80 percent LTV loans. The effective rate decreased from last week.