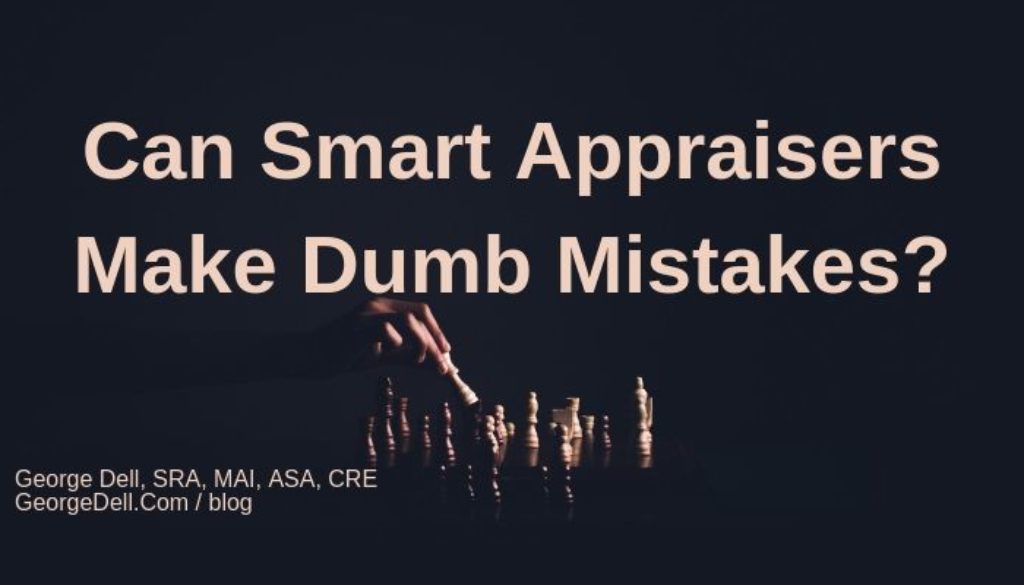 Excerpt: I am a smart and educated, award-winning appraiser. It is not possible for me to be irrational. Of course not. You can see that. I can see that. But appraiser mistakes are not good.

A high IQ and education won’t necessarily protect you from highly irrational behavior—and it may sometimes amplify your errors. David Robson, in an Excerpt from The Intelligence Trap

Oh No! Who is this guy!? Doesn’t he know how smart I am? Why, even my peers have said I am smart. I pride myself on my critical thinking. Even my kids say that! What more proof do you need? Let’s get this straight: I am rational, smart, of high IQ and extremely educated, especially in my chosen field!

Recently, scientists have started to measure what things go with irrationality. There is even a name for this field of study, this measure: dysrationalia. The studies roughly parallel the studies of dyslexia and dyscalculia (difficulty in dealing with number things).

Subscribe to this blog (upper right of this page) and get all the posts emailed when they are posted!!

Excerpt: Reaching a historic new low, only 10.4% of offers on homes written by Redfin agents in August faced a bidding war. Last month, that number was 11.4%. Last year, that number was at 42%.

August’s total is the lowest bidding war rate on record since 2011, according to Redfin.

My comments: What’s happening in your market? Reliable appraisals depend on appraisers knowing what is happening, particularly when a market is changing.

My market has seen a significant decline in multiple offers since early 2018. On the flip side, there are relatively few homes for sale. Prices have been stable.

Local agents tell me that the homes that sell have remodeled kitchens and baths. In many other parts of the country, there has been a shortage of new homes to buy, particularly in affordable prices. Maybe buyers want new homes, can’t find them, and are looking at existing homes that have been fixed up. 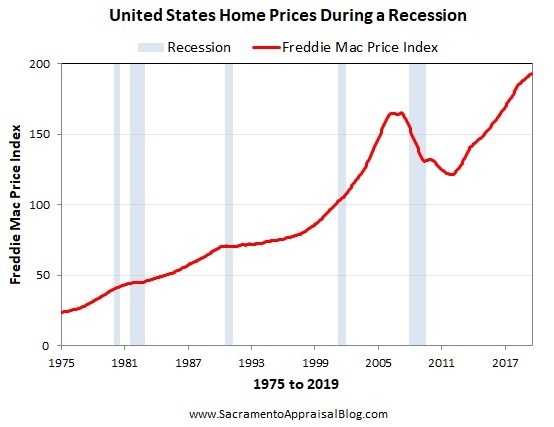 The coming recession & the housing market

Don’t get too stuck on prices: When we think about a recession, let’s of course watch prices, but the bigger story will likely be found in what happens to the number of sales. Are buyers playing the market or are they backing off? In short, let’s not forget to watch sales volume because we’re so obsessed with prices.

My comment: I have been reading economists’ comments on this topic, including the link above. But, appraisers are much closer to the actual market. Many thanks to Ryan for good explanations, plus some graphs, of course!

From ancient Rome to modern Atlanta, the shape of cities has been defined by the technologies that allow commuters to get to work in about 30 minutes.

Excerpt: In 1994, Cesare Marchetti, an Italian physicist, described an idea that has come to be known as the Marchetti Constant. In general, he declared, people have always been willing to commute for about a half-hour, one way, from their homes each day.

This principle has profound implications for urban life. The value of land is governed by its accessibility—which is to say, by the reasonable speed of transport to reach it.

My comment: Today, when and commutes have been getting worse in many areas, distance from shopping and walk scores affect home sales it may seem unusual. But, 2,000 years ago Rome was set up to have no more than 30 minutes of walking was needed.

New In the September 2019 Issue of the Paid Appraisal Today!!

To read the full articles, plus 2+ years of previous issues, subscribe to the paid Appraisal Today.

Cancel at any time for any reason!!!

www.appraisaltoday.com/products  or call 800-839-0227. <What’s the difference between the Appraisal Today free weekly email newsletters in this blog and the paid monthly newsletter?

If you are a paid subscriber and did not get the September 2019 issue, emailed Tuesday September 3 2019, please send an email to info@appraisaltoday.com and we will send it to you!! Or, hit the reply button. Be sure to put in a comment requesting it. 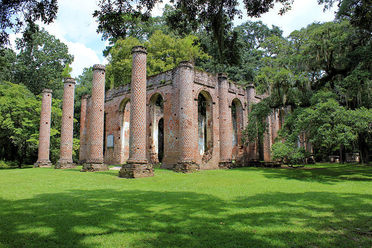 The United States of Abandoned Places

From Alabama to Wyoming, there are abandoned towns, amusement parks, and ruins lurking in your home state.

Excerpt: Hidden deep in forests or in plain sight on the side of highways, the United States has its fair share of abandoned places. Ghost towns, forgotten theme parks, and overgrown hospitals can evoke a sense of mystery about what came before us.

Sometimes places are abandoned after disaster strikes: Jazzland, a former amusement park in New Orleans, was judged too expensive to restore after Hurricane Katrina and left in ruin. In other cases, times change so rapidly that entire towns can be left behind: the former gold-rush settlement of Rhyolite, Nevada, was inhabited for only 12 years before nearby mines closed and residents were forced to move elsewhere.

Scroll down the page, check out the fotos, and click on a few. For more info, click here

My comment: abandoned places are one of the most popular links for my readers, and myself ;>

Excerpts: The inspection report, sketch, measurements and photos give the appraiser enough information to satisfactorily complete the appraisal report. I’ve found the inspectors take way more pics than necessary. They take a few pics per room instead of just one. They take up close pics of the materials. The photos are large and detailed so you can zoom in if there are any doubts.

The measurements don’t always equal the tax roll due to unpermitted additions or mistakes e.g. adding area of stairs. Same happens when I inspect. I only include the tax roll gross living area, bed/bath in my report anyway.

The materials in the written inspection report aren’t always correct but it doesn’t matter. An agent wrote “wood siding” when it’s actually “shingle siding” which I can clearly see in the pic. I report what I see in the pic. The underwriter can see the material in the pic anyway in case the agent or appraiser made a mistake.

To see a copy of the 1004p form and read more, click here

My comment: FYI, Fannie Mae is using the 1004p form to test bifurcated appraisals. I pretty sure it will be replaced by a much better form. The September issue of the paid Appraisal Today has an excellent article Bifurcated Appraisals and USPAP Compliance, written by Julie Friess, SRA

Should I Buy a Home Next to a Drug-Treatment Center?

Excerpts: There is evidence that such centers have little to no impact on safety and property value. But every home buyer has different criteria.

High on the list of things that evoke cries of “not in my backyard” are residential drug-treatment centers. Some worry that they lead to crime and violence, and harm property values.

Two recent studies debunk some of those theories. A 2016 study in Baltimore found that the areas surrounding drug-treatment centers were no more dangerous than those around convenience stores, and safer than those near liquor stores. Across the country, a 2017 study in Seattle found that the presence of a drug-treatment center had no impact on home values, after other variables were factored in.

“There could be nuisance crime right around the property,” said Brady P. Horn, an associate professor of economics at the University of New Mexico, and a co-author of the study about Seattle property values. “There are also positive aspects. They treat substance disorders and they make a neighborhood better. To me the benefits and the costs wash out.”

Note: I publish a graph of this data every month in my paid monthly newsletter, Appraisal Today. For more information or get a FREE sample issue go to https://www.appraisaltoday.com/products.htm or send an email to info@appraisaltoday.com . Or call 800-839-0227, MTW 7AM to noon, Pacific time.

“Ongoing trade tensions between the U.S. and China led to volatile, yet declining Treasury rates last week, causing the 30-year fixed mortgage rate to fall to 3.87 percent, its lowest level since November 2016,” said Joel Kan, MBA’s Associate Vice President of Economic and Industry Forecasting. “Despite lower borrowing costs, refinances were down from their recent peak two weeks ago, but still remained over 150 percent higher than last August, when rates were almost a percentage point higher.”

Added Kan, “Purchase applications increased 1 percent last week and were 5 percent higher than a year ago. Consumers continue to act on these lower rates, but the volatility in the market is likely leading some borrowers to pause refinancing and buying decisions.”

The average contract interest rate for 30-year fixed-rate mortgages with conforming loan balances ($484,350 or less) decreased to 3.87 percent from 3.94 percent, with points decreasing to 0.34 from 0.38 (including the origination fee) for 80 percent loan-to-value ratio (LTV) loans. The effective rate decreased from last week.

The average contract interest rate for 30-year fixed-rate mortgages with jumbo loan balances (greater than $484,350) increased to 3.94 percent from 3.89 percent, with points decreasing to 0.24 from 0.26 (including the origination fee) for 80 percent LTV loans. The effective rate increased from last week.

The average contract interest rate for 30-year fixed-rate mortgages backed by the FHA remained unchanged at 3.80 percent, with points decreasing to 0.32 from 0.33 (including the origination fee) for 80 percent LTV loans. The effective rate remained unchanged from last week.

The average contract interest rate for 15-year fixed-rate mortgages decreased to 3.29 percent from 3.31 percent, with points decreasing to 0.32 from 0.33 (including the origination fee) for 80 percent LTV loans. The effective rate decreased from last week.

The average contract interest rate for 5/1 ARMs decreased to 3.40 percent from 3.42 percent, with points decreasing to 0.27 from 0.39 (including the origination fee) for 80 percent LTV loans. The effective rate decreased from last week.