I’m sure the folks on Cannibal Road are lovely people, I just won’t be attending any of their dinner parties. These are the streets that you don’t want to find yourself driving down – trust us, no good can come from a stroll on Buckets of Blood Street. Proceed with caution..

Thanks (again) to Jonathan Miller for this great link!!

What are the strangest street names you have seen?

POST YOUR STRANGE STREET NAMES BELOW AND READ OTHER COMMENTS!!

My comment: Yes, there is an O’Rourke Street in a nearby city!!

How many appraisers are doing FHA appraisals now?

My comment: I suspected that most appraisers will do them even with all the additional work required. Only 13% have given up FHA appraisals.

I do lots of private appraisals. Lately my ratio is probably 80-90% private easily. I have a pretty good sense of what the market will bear for private work, namely estate appraisals. In no way am I saying to charge more or fix prices, but remember that consumers are used to putting down a good chunk of change for mortgage appraisals. We know the appraiser does not see the full fee, but the consumer pays the full fee. Thus I find it puzzling why an appraiser would quote well below the market rate.

One other thought. There are always clients who want to pay less. I used to put up weekly posts on Craigslist years ago to try to attract private work. But you know what I found? Everyone and their mom wanted a big discount. It was like I was competing for the lowest bid, so I stopped posting their entirely. The moral of the story? As business owners and professionals, we choose our clients and we are in charge of our fees too. Just know the market and price accordingly (which is what we would tell Realtors to do with their listings).

Here is an image I made to help show the real cost of accepting lower fees from AMCs as well as undercharging for private work. Again, this is not about price fixing, but rather the financial consequences of the current AMC situation, accepting lender work at a below market rate, and charging under market rate for private work. There is a huge cost. When looking at the numbers, if we charge below market, we might end easily working for weeks more each year (some well over one month). Yikes. 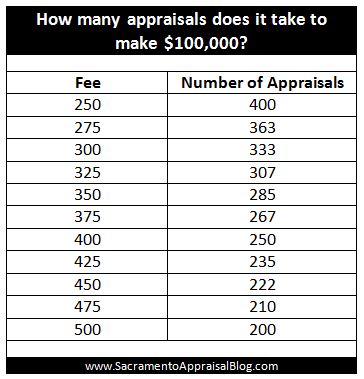 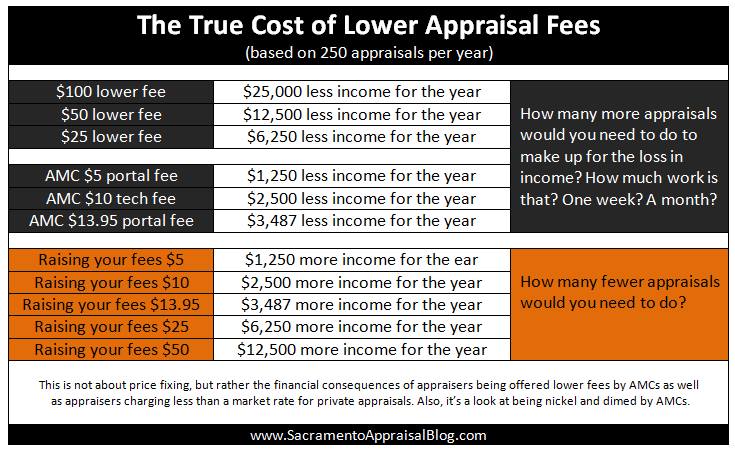 Many thanks to Ryan for these great comments and graphs. He posted this on Facebook and an appraiser email chat group

Is a concealed weapon your new appraisal tool?

Appraisers, like real estate agents, can find themselves in compromising positions because our jobs require us to meet strangers in their  homes or even be in vacant houses that may be occupied by people who shouldn’t be there, such as foreclosure properties that may have squatters. It is in these situations that a firearm could be useful, so today I’d like to discuss things to consider before adding a gun to your appraisal tool belt.

Read the article here plus all the comments

Carrying a firearm on appraisal inspection

Interview with two appraisers by Dustin Harris, the Appraiser Coach

There has been a lot of talk in the national media lately about guns.  Today, we have two appraisers on the program who both choose to carry a firearm on appraisal inspections for personal protection.  Mike and Lisa join us to discuss why they choose to protect themselves by carrying a concealed weapon.

Listen and read the comments at http://theappraisercoach.libsyn.com/089-carrying-a-firearm-on-appraisal-inspections#TMQHis3hhQrO3aug.99

My comment: None of my friends or family members have ever had firearms in their homes, so I never considered it. I have never carried a firearm, or even had one in my house. My husband taught horticulture in a state prison for many years. I would not let him have a firearm at home so we had a pellet gun and a baseball bat near the front door. I still have the baseball bat. There were some “iffy” moments over the years when inspecting “empty” foreclosure homes in high crime neighborhoods. Today I would carry pepper spray or something else.

Adjustments Part 1 – Are you making too many adjustments?

In the FEBRUARY 2016 issue of the paid Appraisal Today

The results of a Appraisalport poll done in April, 2015.

Using a regression modeling program supplied by a vendor    7%

Of course, the most common reason “my experience” was not included or maybe it is in “estimating from market data”. I’m not sure where “adjustments I got many years ago from my supervisor” fits.

The percent of appraisers using various methods may have increased since then.

I recently attended an appraisal seminar with very experienced appraisers and about 20 attendees. Only one person raised his hand when the moderator asked if anyone was using multiple regression software.

When speaking with appraisers, I get a very wide range of answers, such as my experience, cost, matched paired sales, trend lines, median values, etc. Most had one, or a few, methods that they like and regularly use.

To read the full Most Excellent article, subscribe to the paid Appraisal Today!!

Cancel at any time. For any reason!!

Subscribers get, FREE: past 18+ months of newsletters plus 4 Special Reports!!

If you are a paid subscriber and did not get the February 2016 issue, emailed Feb. 4, 2016, please send an email to info@appraisaltoday.com  requesting it and we will send it to you!! Or, hit the reply button. Be sure to put in a comment requesting it ;>

Using satellite images in appraisals and for doing archaeology research

My comment: How did we make it without our Google Earth? There are lots of other ways to use satellite images. You can be an amateur archaeologist!!

Sarah Parcak’s innovative work in space archaeology has earned her the nickname “the Indiana Jones of the 21st century.” When she appeared-wearing Indian Jones’ iconic hat-on

The Late Show with Stephen Colbert in January, the host referred to her as a “space archaeologist wizard genius.” In November 2015, she was awarded the 2016 TED Prize and $1 million.

This week, she has announced her plans for the prize money: She’s giving us all a chance to become amateur space archaeologists.

How will this work? First, her team will process and upload satellite imagery to the system. Users who access the system will then be given a deck of images each showing a small plot of land, with clues, keys, and examples to help them analyze the imagery. The users will tag imagery that appears to show new sites or evidence of looting at existing sites; after enough users tag an image, Parcak’s team will verify the discovery.

The Mortgage Bankers Association increased its 2016 industry originations forecast to $1.48 trillion from its January projection of $1.38 trillion to reflect market turmoil that has held interest rates down.

Rates are still expected to rise during the year, but at a pace slower than was thought just a month ago, explained Lynn Fisher, the MBA’s vice president of economics and research at the group’s National Mortgage Servicing Conference in Orlando, Fla.

(Editor note: Many appraisers won’t miss this lender) J.P. Morgan Chase JPM, -1.67%  lent $22.5 billion in mortgages in the fourth quarter, down from $51.2 billion in the same quarter three years ago.

Banks originated 74% of all mortgages in 2007, but their share fell to 52% in 2014, the most recent data available from the Mortgage Bankers Association. And it could go even lower

They now face a regulatory environment so strict that many are afraid to lend, even to customers with the most pristine credit. They’re still paying up for misdeeds done during the bubble. There’s essentially no private bond market to whom to sell mortgages.

And fighting those battles on behalf of their least-profitable divisions means residential lending just isn’t worth it for many banks.

“We can’t make money in the business,” BankUnited CEO John Kanas said when he announced a mortgage retreat on a January earnings call. “We realized that this was the lowest-margin, most volatile business we had and we decided that we should exit.”

They now face a regulatory environment so strict that many are afraid to lend, even to customers with the most pristine credit. They’re still paying up for misdeeds done during the bubble. There’s essentially no private bond market to whom to sell mortgages.

And fighting those battles on behalf of their least-profitable divisions means residential lending just isn’t worth it for many banks.

“We can’t make money in the business,” BankUnited CEO John Kanas said when he announced a mortgage retreat on a January earnings call. “We realized that this was the lowest-margin, most volatile business we had and we decided that we should exit.”

If you do lender work, read this article and check out the graphs!!

What does this mean for you? Less work from some AMCs. If you do direct lender work, you may lose a client or two. Check out smaller lenders, including credit unions and local/regional banks who are doing more loans.

HOW TO USE THE NUMBERS BELOW. Appraisals are ordered after the loan application. These numbers tell you the future for the next few weeks. For more information on how they are compiled, go to www.mbaa.org

Note: I publish a graph of this data every month in my printed newsletter, Appraisal Today. For more information or get a FREE sample issue go to www.appraisaltoday.com/products.htm  or send an email to info@appraisaltoday.com . Or call 800-839-0227, MTW 8AM to noon, Pacific time.

WASHINGTON, D.C. (February 24, 2016) , according to data from the Mortgage Bankers Association’s (MBA) Weekly Mortgage Applications Survey for the week ending February 19, 2016.  This week’s results include an adjustment to account for the President’s Day holiday.

The average contract interest rate for 30-year fixed-rate mortgages with conforming loan balances ($417,000 or less) increased to 3.85 percent from 3.83 percent, with points increasing to 0.42 from  0.36 (including the origination fee) for 80 percent loan-to-value ratio (LTV) loans.  The effective rate increased from last week.

The average contract interest rate for 30-year fixed-rate mortgages with jumbo loan balances (greater than $417,000) increased to 3.80 percent from 3.74 percent, with points decreasing to 0.25 from 0.26 (including the origination fee) for 80 percent LTV loans.  The effective rate increased from last week.

The average contract interest rate for 30-year fixed-rate mortgages backed by the FHA increased to 3.72 percent from 3.67 percent, with points increasing to 0.45 from 0.34 (including the origination fee) for 80 percent LTV loans.  The effective rate increased from last week.

The average contract interest rate for 15-year fixed-rate mortgages increased to 3.12 percent from 3.11 percent, with points increasing to 0.40 from 0.31 (including the origination fee) for 80 percent LTV loans. The effective rate increased from last week.

The average contract interest rate for 5/1 ARMs increased to 3.07 percent from 2.92 percent, with points decreasing to 0.30 from 0.32 (including the origination fee) for 80 percent LTV loans.  The effective rate increased from last week.

The survey covers over 75 percent of all U.S. retail residential mortgage applications, and has been conducted weekly since 1990.  Respondents include mortgage bankers, commercial banks and thrifts.  Base period and value for all indexes is March 16, 1990=100.