Where VA loans are soaring. Are you doing VA appraisals? 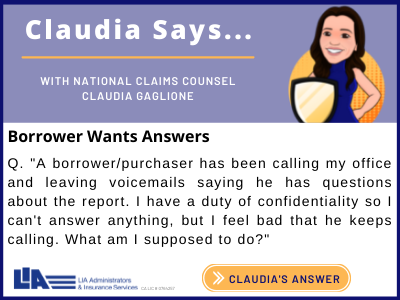 Bad News: Dropped Phone Causes Utah Home to be Valued at Nearly $1B

Excerpt: The 1,570-square-foot house built in 1978 on 2 acres in an unincorporated area of the county was recorded in 2019 tax rolls with a market rate value of more than $987 million and an overestimate of about $543 million in taxable value. In reality, the property should have only had a 2019 taxable value of $302,000, according to county property records.

That error — which the Wasatch County assessor explained possibly occurred when a staff member may have dropped their phone on their keyboard — has resulted in a countywide overvaluation of more than $6 million and revenue shortfalls in five different Wasatch County taxing entities.

Excerpt: QUESTION: I like to use the term, “in my professional opinion” as part of my reports. After all, I am a professional paid to express opinions. Recently, the reviewer for an AMC requested I remove that term from my report since, in her words, “…it has nothing to do with value”. Is the reviewer overreaching on this? The reviewer has the right to tell me if there is an error in my report, but not to criticize the language I use in my report. What should I do?

ANSWER: As Gertrude Stein was supposed to have said upon seeing Oakland, California for the first time: “There’s no there there!” For good or ill, the same may be said about many real estate appraisal reports and the convoluted language they insist on using…..

My comment: this is the best article I have ever seen for practical tips on how to reply to AMC/underwriter questions with lots of examples.

Where Are the Most Mcmansions for Higher Appraisal Fees

Appraisers – How to Get Into Trouble